Below is a sample of some of the great Indian dishes that were served at our recent weddings.

A popular Indian dish consisting of a potato based curry, diced tomatoes, grilled onions, green peas, capsicums (green peppers), cauliflower and carrots in a spicy gravy. The dish is typically garnished with coriander, lemon, and chopped onions and enjoyed with bread. 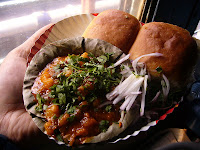 A common street snack consisting of a fried crisp shell with a hollow middle filled with a mixture of water, tamarind, chili, chaat masala, potato, onion, and chickpeas.  It has both a sweetened and tart taste.

A mixture of puffed rice with various vegetables and a tangy tamarind sauce. It is typically made with juices from tomatoes, chutney and garnished with onions, coriander, and lemon juice. This dish can be either sweet or spicy depending on how you like it.

A stuffed chappati wrap filled with chicken, shrimp, paneer, or vegetables and garnished with cilantro, chutney and more. 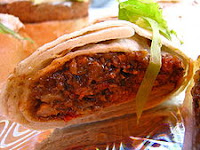 A cold beverage prepared by mixing rose syrup with vermicelli and tapioca pearls along with either milk or water. It is often enhanced by adding vanilla or other flavored ice cream to make for a refreshing dessert .